The city of Tarnów

Tarnów is located in the southeastern part of Poland 80 km from Kraków. Tarnów has a convenient access to Kraków airport (there is a frequent train connection from Tarnów to Kraków-Balice airport). From 1975 to 1998 Tarnów was the capital city of the region. Today Tarnów is populated by 120 thousand inhabitants. There are three universities in Tarnów with the total number of 15 thousand students. 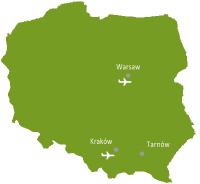 Tarnów is a beautiful town with an outstanding history dating back to XI century. According to the history of the whole city of Tarnów, the nearby St. Martin’s Hill used to be the cradle of Tarnów settlement. From the middle of IX century to the beginning of XI century prevailing town covered the area of about 10 hectares. It was probably a tribal town of Wiślanie, which was ruined during the first Piasts' monarchy in the 30s of XI century. In XV century a famous writer Jan Długosz gave Tarnów its name from the name of bushes, called 'tarnina' (Eng. blackthorn) which plentifully grew the slopes of the St. Martin’s Hill. The Prince of Kujawy, Władysław Łokietek searching support among the Małopolska region elites influenced them significantly. People, so far politically unknown, were given power in return for the unlimited loyalty to the new ruler. It was Mr Spycymir – the later owner of Tarnów – who made career this way. He built his abode, the castle on the St. Martin’s Hill, in 1331.

It was in the year 1330 that the King’s Office issued greaseproof document, affixed with the King’s seal to the Cracow governor. It was the symbol of King Władysław’s privilege, which entitled Spycymir to locate the city on German norms, such as Cracow. The climax of the hill was reserved for building of a church with the graveyard. In the very center of the hill, a square was traced, with two crossing streets coming out of its every corner. First of all , the location of Tarnów, apart from mapping out squares and grids, was to populate the area. Next to local residents, there were settlers brought from Krakow and Nowy Sącz by Spycymir and his successors. Quite often they were of German origin who quickly became Polonised. 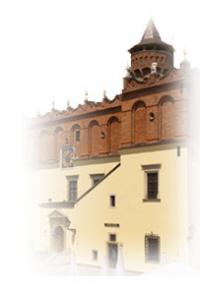 But not only in the old days was Tarnów a prominent place. The town has its lively atmosphere with many cultural events for young people to enjoy. Films, musical and theatrical festivals, unusual open air events, free concerts including are organised on the Market Square – the very heart of the town.